I am promoting as widely as possible a Rocket Stove kitchen upgrade.
These 3 stone fires are normal family kitchens
This picture shows how 90% of rural Gambians cook on a daily basis. 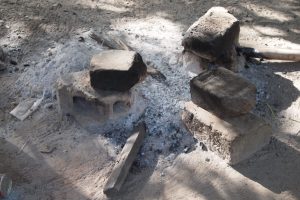 1) It uses a lot of wood which has to be gathered on a very regular basis from surrounding forests.
2) It is very smokey since recently cut timber has a fair amount of sap in it.
3) In the 3 month wet season, it gets worse and exposure to the smoke & inhalation of it is greater since the fire is positioned under some kind of shelter from the rains. Lungs and eyes are badly effected by this toxic smoke.
4) The continual gathering of wood and deforestation means going greater distances to collect it and carry it back to their home.
5) A less talked about issue; since cooking is a female responsibility they also have the job of sourcing the wood which exposes them to the not unheard of problem of “being interfered with” while out alone in the forest.

A Rocket Stove positively addresses All of the above issues.
This picture shows such a stove which I built in our garden to prove the theory to myself. 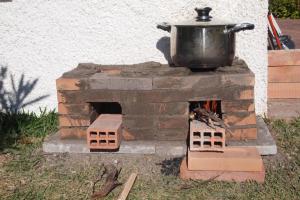 1) It uses at least 80% Less wood.
2) The wood used is twigs and small branches thus avoiding cutting down large branches or whole trees. Gathering time is less and usually closer to the village.
3) Reduction in deforestation
4) There is NO Smoke (there is a tiny amount during the starting of the fire). Fire without smoke is a difficult concept to sell in rural Africa!
5) The temperatures are higher so cooking times are reduced.

Note the brick with the holes upon which the sticks are resting. This is its very secondary purpose, Its main and very critical purpose is to facilitate air being sucked in under the sticks.
As the updraft in the chimney area increases the intake of air increases and since the air comes in under the fire, as it rises up through the flames it is heated and causes the particles immediately above the flames to combust. These particles in a normal fire are the smoke, hence their combustion eliminates the smoke with the added benefit that when they combust the temperature they produce is significantly higher than the temperature of the flame itself !

It’s a no brainer but has been difficult to introduce, a possible lacking of my salesmanship. But this week I made significant progress.
Samba, of Bafaluto village finally took an interest in it.
Part of my problem in the past has been that anything and everything to do with cooking is the women’s responsibility and since building a Rocket Stove means acquiring (or making) bricks and doing very basic cementing, this type of work was not in the domain of the women.
My friend Samba bit the bullet and carefully built this Rocket Stove for his wife. She is delighted with it.

It took a while to convince him that the pot did Not need to be in contact with the flames (as it is in the 3 stone arrangement), but that in fact it needed to be above the flames to get the benefit of the extra heat from the combustion of the particles/smoke.
It’s now the talk of the village. My target this year is to get the Whole village, about 200 families, converted to Rocket Stoves

Diagram of the technology.

Samba is employed on a temporary basis as gardener at Banjul Airport earning 3,000 Dalasis per month, 55 Euro. The family´s stable diet of rice costs at least 1000 Dalasis per month, 19 Euro.
From personal knowledge of The Gambia, this is barely a subsistence wage, therefore I funded the costs of the 52 bricks & a small bag of cement for his Rocket Stove, just under 50 Euro. Great value for money!
Anyone want to treat another family or two to a kitchen upgrade?
Donations can be made via http://www.pingcharity.co.uk website

More than a little interested in how we can all make the community we live in a better place. "The world has enough for everyone's need, but not enough for everyone's greed" Gandhi. Let's all learn what's enough.
View all posts by tryingtobefair →
This entry was posted in Politics. Bookmark the permalink.

This site uses Akismet to reduce spam. Learn how your comment data is processed.